This search form uses an instant search feature. As you type, search results will appear automatically below the search field. When you've entered you desired search terms use tab to navigate through the available results and hit enter to open the selected page or document.
Clark County Green Schools Teaches Kids About Sustainability
Marie Bouvier
Wednesday, January 01, 2020

It’s not often that a presentation starts with a story about a one-eyed, one-winged, one-legged chicken.  But Will Hornyak, a professional storyteller, grabbed the attention of every kid in the room as he hopped, flapped, and crowed on stage.  The story about the Adventures of Medio Pollito (half chicken) helped him teach Union Ridge Elementary students to be more aware of the environment.

The program was part of a Clark County Green Schools program educating students on sustainability.  But instead of stern warnings, Hornyak’s environmental messages came wrapped in a fun package.  It was easy to remember the things Medio Pollito taught them.  The interactive story had costumes, audience participation, call and response, and so much entertainment that the students may not have even realized they were learning new ways to care better for the environment.  Even small changes add up to a big difference, Hornyak told them—like the food composting and recycling students were already doing.

Ridgefield schools have food waste composting and recycling available in all school cafeterias.  Rather than throwing everything away at the end of a meal, students divide waste into compostable food, recyclable products, and trash.  It’s second nature now for students to sort the items on their lunch trays.  And statistics show that the program is making a difference.  Across Clark County, schools recycle 2,000,000 pounds of material each year, and 1,600,000 pounds of food waste is sent to compost. 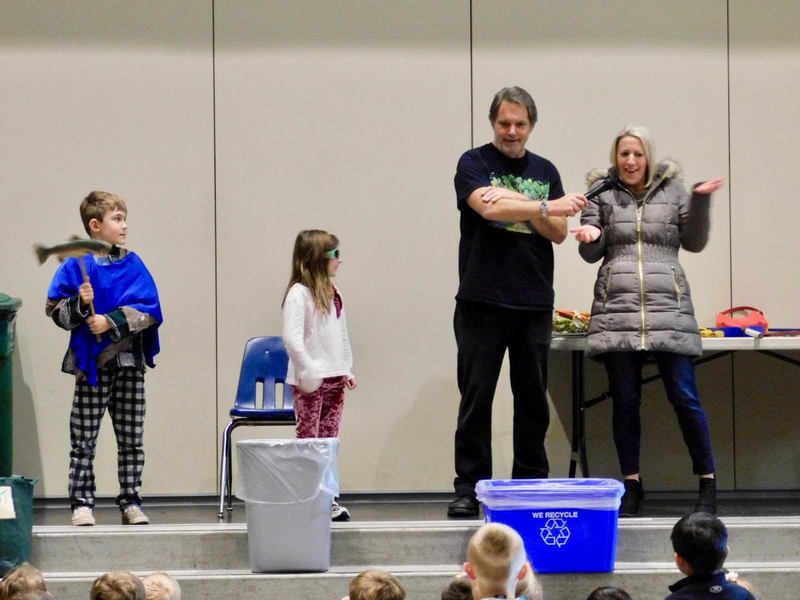 Storyteller Will Hornyhak has audience members help to tell the story of Medio Pollito (the half chicken). 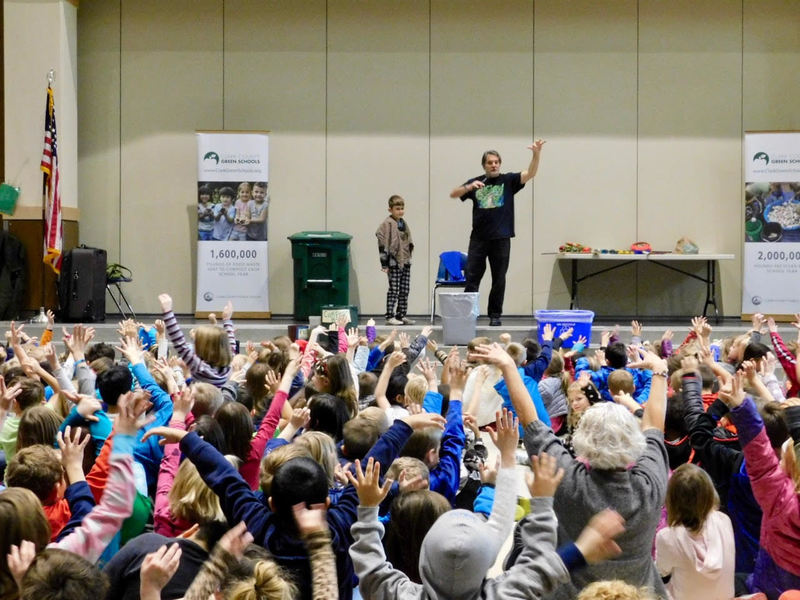 The whole room participates, making a forest of trees and limbs swaying  in the breeze.

The story of Medio Pollito gave even more ways for students to help.  As the little chicken hopped across the kingdom to meet the king, he planted trees to shelter the stream, keeping it clean and cool for the fish and other animals.  When he got to the river, it was too dirty from candy wrappers discarded on the playground, soap suds from cars being washed on driveways, and even dog poop (saying “dog poop” to a room full of elementary school students is a guaranteed big laugh).  The chicken told the people to keep the river cleaner.

When the chicken was captured by the king’s cook, he was able to escape with the help of his new friends:  the stream, the river, and the animals.  Then the wind came to carry him up to where he couldn’t be reached, atop a weather vane, where he served the whole kingdom, keeping a watchful eye on the people and telling them all the good things they were doing for the environment.

Hornyak told the students how they could help the environment like Medio Pollito:  planting trees, throwing away trash, recycling, composting, washing things with less soap, reusing items, and even picking up dog poop (another big laugh).  So what do elementary school students have in common with a one-eyed, one-winged, one-legged chicken?  Maybe more than you think.  These students are ready to teach the rest of us, just like Medio Pollito, to make the world a better place.