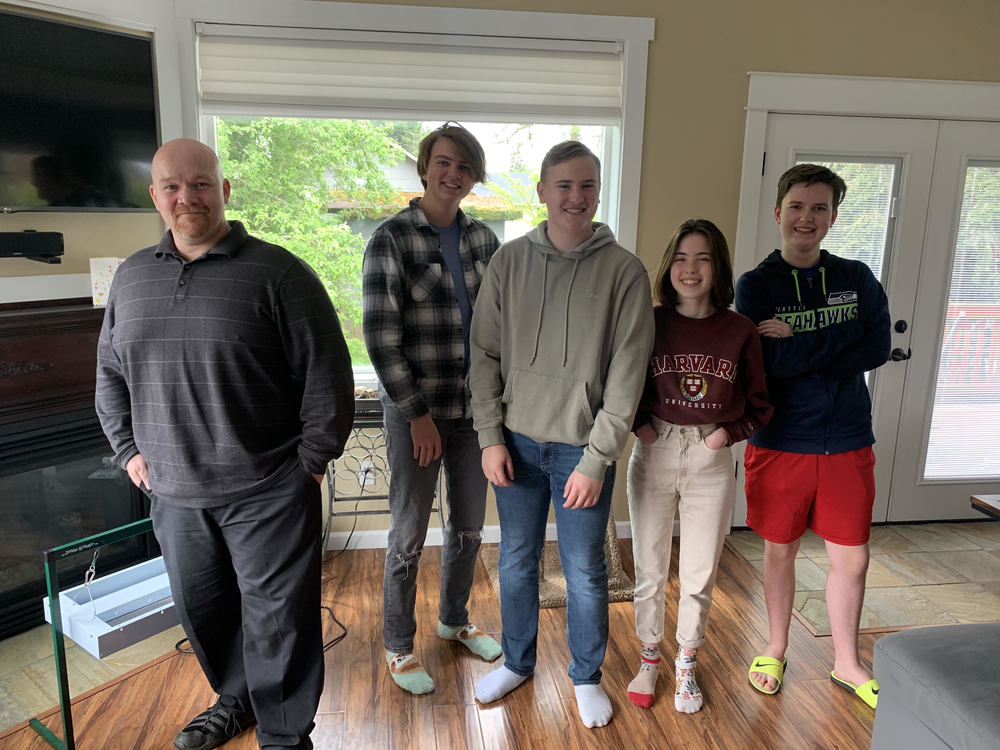 The Ridgefield High School Knowledge Bowl team stunned the competition by winning third place at the National Knowledge Bowl on Saturday. The small-town school team was elated by their come-from-behind success against teams from all divisions nationwide.

Being new to national competition, the Ridgefield team went into the event expecting nothing more than a learning experience. “We basically went into it just hoping not to be in last place,” team captain Jonah Kropp said. “I’m still in a little bit of shock.”

A challenging start becomes a race to the top

The team had to overcome a huge challenge during the first round of competition. Meeting in coach David Jacobson’s classroom at 7:30 a.m., the group planned to take part in the online competition from there. But after completing only six questions, the school’s internet connection faltered, making it impossible to proceed.

Determined to continue competing, the students rushed to Kropp’s house to use the internet connection there. After a frantic scramble to get set up and logged back into the online event, the team made it back into the round by question 21 and did well enough to overcome the fact they had missed a significant portion of the questions. “We still managed to tie for second place in that round,” team member Adam Ford said with a chuckle.

After the inauspicious start, the team was up and running. They still had a full day of competition ahead of them featuring a grueling schedule of tests from 7:30 a.m. to 5:30 p.m. against seasoned teams from school districts of all sizes. The written round was followed by six rounds of oral questions. The overall rankings were updated at the conclusion of each round, and Ridgefield’s team could see their score inching higher each time.

“There were many different sizes of schools competing, and they were color coded, so we could see ourselves getting closer and closer to the top of the blue group,” Kropp said. “After a while, we thought, ‘We’re doing pretty well, actually.’ Especially considering our goal was to not finish last; it was pretty remarkable.”

With a final round of difficult questions, the Ridgefield team held its own against fierce competitors. “The other teams are all state champions; all the kids there are good,” coach David Jacobson said. “So it was really cool to see our team’s energy, the anticipation and the guessing, pulling answers out of the ether.”

At the end of the round, the Ridgefield team found themselves in third place nationally in a very close finish. “We placed third in the final round, but we were just one point away from second and three points away from first,” said team member Olivia DesRochers.

Ford agreed, saying, “Looking at final scores, it was super close. Even though we got third, we were close.”

Asked how they reacted when they realized they had just placed third at the National Knowledge Bowl, Kropp said, “There was a lot of stunned silence, from what I remember.”

As other team members nodded, Ross added, “I think it still hasn’t occurred to me how crazy it is.”

A new kind of competition

During most years, Knowledge Bowl competitions are held in person. Much like the game show Jeopardy!, players race to be the first to buzz in with the correct answers to challenging questions. Teams of four students answer questions across a wide range of subjects, either independently or collaboratively. But this year, there were changes to the competition in both style and format.

Most Knowledge Bowl competitions were held online this year, but the platforms they used varied. While some of the state and regional competitions took place via Zoom, the national competition was held entirely on Discord, meaning the teams couldn’t even see each other during the competition.

“Every single level of competition we’ve competed in, from sub-regionals to regionals to state to nationals, has been an entirely different format for answering questions,” Kropp said.  Fortunately, the Ridgefield team had been practicing online since September, so they were able to adjust their style and strategy to each new format.

Jacobson pointed out that there was also a shift in questioning from state to national level competition. “On Thursday, we practiced against the national competitors so we could see how Discord worked. And we got to do a few sample questions,” he said. “Our team had never seen national level competition before, and it was blistering fast. Within two words of each question, someone had already answered. So our team was a little intimidated.”

The National level contest introduced a new style of question as well. With only two weeks left to practice before the contest, the National Knowledge Bowl announced a new category where students had to match a series of complex interconnected answers in order to reach the final answer. The new questions, the fast pace, and the difficulty of national competition increased the pressure on the Ridgefield team, making their third-place finish even more impressive.

This was actually the first year for an official National Knowledge Bowl competition, so no one knew what to expect. “There are national tournaments that are similar,” coach Jacobson explained. “Usually once you get past the state Knowledge Bowl, you switch to a national Quiz Bowl. But Quiz Bowl is a different format with different questions. It’s great to have the National Knowledge Bowl now because the kids are going to be more familiar with it. It’s a level playing field.”

Ridgefield students have an edge in Knowledge Bowl competitions because the program starts in middle school rather than at the high school level. All of the students on the varsity team participated in Knowledge Bowl as middle school students, so they joined the team as seasoned competitors. In fact, the varsity team has students from each grade level this year: Ford is a freshman, DesRochers is a sophomore, Ross is a junior, and Kropp is a senior.

Kropp started out on a middle school team with its former coach, the late Ken Bisbee, who established Ridgefield’s Knowledge Bowl program. Kropp said part of the program’s continued success is the fact that it gives younger students time to develop into skilled and practiced competitors, and he credits Jacobson with continuing Bisbee’s tradition. “We have a dedicated feeding Knowledge Bowl program from the incredibly talented seventh and eighth graders Mr. Jacobson has brought up. Mr. Jacobson’s enthusiasm is infectious; he has recruited so many people to it because he really shows and embodies how fun Knowledge Bowl can be.”

DesRochers served as captain of her eighth-grade team. She pointed out that the number of middle school team members keeps increasing with Knowledge Bowl’s popularity. “Last year, the middle school had six full teams,” DesRochers said. “So many kids were interested, they had to split into competition and non-competition teams.” Jacobson agreed, saying that he runs two practices simultaneously at the middle school to accommodate all the students.

Ford was on one of the first middle school teams under coach Jacobson. “I had Mr. Jacobson for seventh grade English,” Ford said. “A couple months later he started telling me about Knowledge Bowl. Now three years later, I’m at nationals.” He shrugs, still surprised by how quickly it all happened.

The varsity team members have all become mentors to the next generation of competitors. “We’re going to have a middle school meet tomorrow,” Jacobson said. “The question readers for all the rooms are members of the high school varsity team. They volunteer for official meets, for practices, and to help them study. They’re just incredible kids.” Jacobson beams when he talks about his students, in awe of all of their achievements.

As a former Knowledge Bowl, Quiz Bowl, and Academic All-America competitor himself, Jacobson knows how much hard work and practice goes into reaching national championships. He credits the students for their hundreds of hours of dedication and effort for how well they performed at the national competition. But he also recognizes that for these students, it’s about much more than winning.

“After the event, we came back to the school to celebrate,” Jacobson said, “We ate cake and other goodies we had here. And what did they do? For the next two hours, they played trivia games.” He shakes his head and laughs. “It’s fun for them, and that’s amazing.”

The students believe Jacobson’s constant cheerleading and support were a vital part of making every Knowledge Bowl event a fun experience. “He is just the best, in terms of making us better, making us study, and hyping us up in general,” DesRochers said. “He’s so enthusiastic. You can tell that he really, really loves Knowledge Bowl. And that impacts us.”

Ross agrees, adding that Jacobson was a large part of the reason they made it to nationals. “I think I can say for everyone here, we couldn’t ask for a better coach.”

Jacobson and the team members also acknowledged the many Ridgefield teachers of Advanced Placement high school and Running Start college classes that helped prepare them for the rigorous event. “This win is a good thing for Ridgefield,” Jacobson said. “It shows that our schools really are the best.”

Kropp will be attending college next year, but the rest of the team plans to keep competing in Knowledge Bowl. Jacobson is looking ahead to next year, brainstorming fundraising opportunities, thinking about getting more buzzer systems for practices, and about covering costs to attend in-person competitions. And he can’t wait to see what more the Knowledge Bowl teams can achieve. “The teams get better the more they work together,” Jacobson said. “That makes me a little more excited for next year and the next year after that.” Jacobson’s eyes sparkle. “We still have two slots left at nationals to go for.”