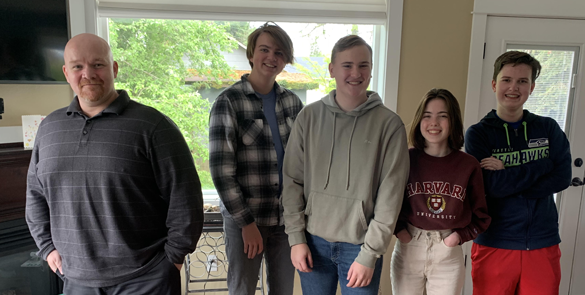 Knowledge Bowl is similar to Jeopardy, with rapid-fire trivia questions covering a broad range of subjects. Flip through a list of sample questions, and you might be surprised at how challenging they are. For example, what is the largest island between Sumatra and Mindanao? What regular solid is bounded by twenty equilateral triangles? What is the only surviving order of oviparous mammals? What is the last syllable of a word called?

For those keeping score at home, the answers are Borneo, an icosahedron, monotremata, and ultima. Did you manage to get any of the answers? The bright young minds that make up Ridgefield’s team are able tackle these questions and many more, and they are always eager to practice for competitions every chance they get.

With Ridgefield teams claiming both first and third place overall at the regional competition, coach David Jacobson is very proud of his students. But for Jacobson and the Knowledge Bowl teams, it’s less about the competition and more about continuing to learn new things together and grow as a team.