This search form uses an instant search feature. As you type, search results will appear automatically below the search field. When you've entered you desired search terms use tab to navigate through the available results and hit enter to open the selected page or document.
Union Ridge Elementary Organizes Sixth Annual World Celebrations Parade in Ridgefield
rsd
Monday, May 13, 2019

Union Ridge Elementary School students will be participating in the school’s annual World Celebrations Parade on Thursday, May 30th from 10:00-10:30 am in downtown Ridgefield.

The parade, now in its sixth year, is a tradition at the school.  In a fun parade setting, it gives the students (in Grades K-4) a chance to show the community the different representations of a variety of cultures they have been studying in class.

In Kindergarten, students will focus on their own unique culture by way of a timeline they will share at the parade.

First graders studied the different cultural elements that make countries unique.  At the parade, each student will share this information based on a country from their family heritage.

Second graders researched a person of historical significance and created a biographical timeline containing interesting facts that they will share at the parade.

Third graders studied the cultural landmarks and geography of five regions of the United States.  Based on their research, they created postcards which they will hand out to spectators along the parade route.

Fourth graders have been studying Washington State and the many wonderful things that represent it.  They selected Washington’s state dance--the square dance—to share at the parade.

Come to downtown Ridgefield on Thursday, May 30th to cheer on our students as they participate in a parade that celebrates the diversity of various world cultures. 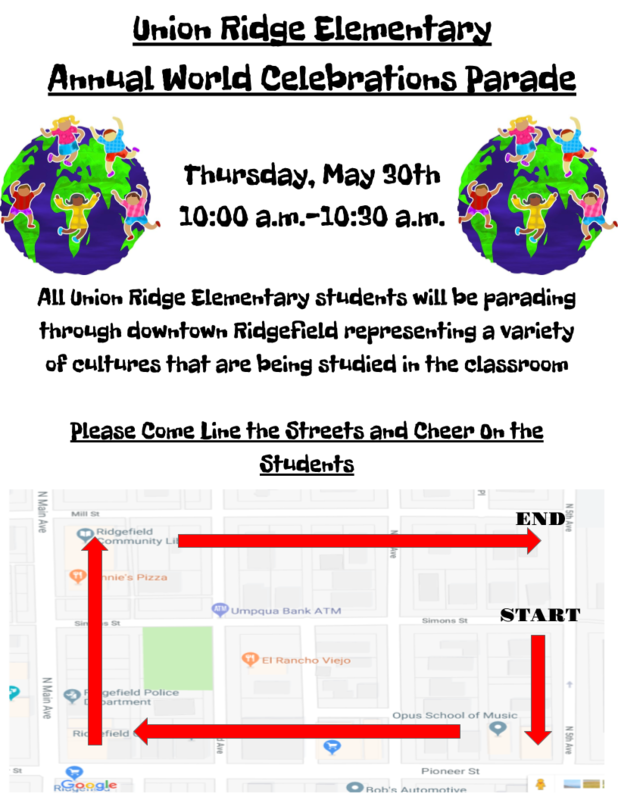