This search form uses an instant search feature. As you type, search results will appear automatically below the search field. When you've entered you desired search terms use tab to navigate through the available results and hit enter to open the selected page or document.
Dracula Production Involves Classes Across Ridgefield High School
Marie Bouvier
Friday, November 01, 2019

Halloween is a time for spooky stories, and there are few spookier than the original Dracula.  Bram Stoker’s novel introduced Count Dracula in 1897.  Ridgefield High School’s production of Dracula is an exceptional production of the original story—and a great collaboration among several classes to utilize the play in teaching.

The theatre department did tremendous work on the play itself.  Drama teacher Kaitlyn Etter had student involvement in every aspect of the play, including acting, set design, stage management, sound, lighting, makeup, and costumes.  The result is a professional level production by students in the drama and stagecraft classes as well as students who audition. 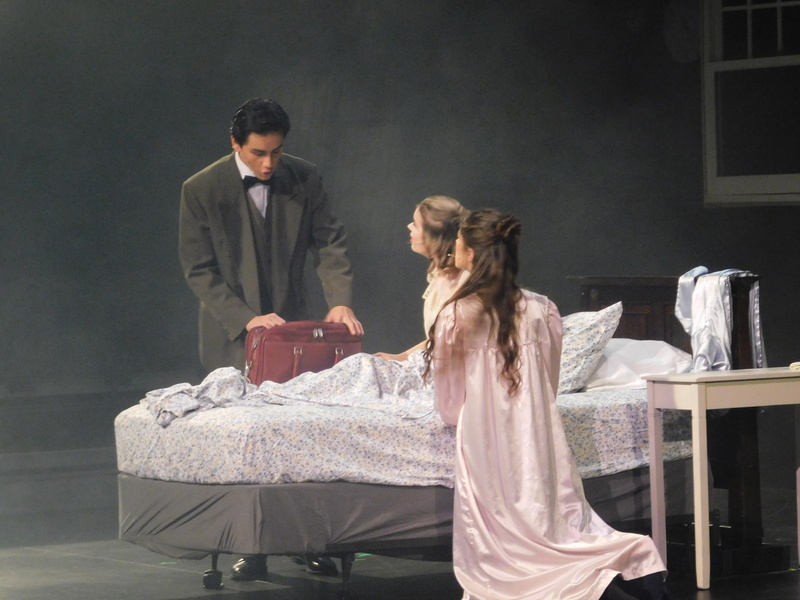 Tamara Hoodenpyl’s Monster Maker art class is “a cross between special effects makeup and sci-fi sculpture.”  They crafted the realistic fangs used in the production.  The fangs were custom fitted to the actors using dental impressions.

Aziza Mansuri’s art class created original designs for the play’s program and posters.  Three pieces by Adaya Stewart, Emma Schmidt, and Patricia Catacutan were selected for use in marketing the play.

Jill Uhacz’ AP literature class read Bram Stoker’s Dracula prior to the play.  The students received free admission to the play.  For the next few class periods, they had a lively discussion of the book and the play.  “Would Stoker be pleased/upset/surprised by RHS’ version of the play?” Uhacz asked.

Students agreed that the production hewed pretty closely to the book, with a few changes made for length and pacing.  One student said, “There were a few things they couldn’t do.  Like the scene with Dracula where they are riding through the snow with the wolves all around them, you can’t really act that out in a high school auditorium.  But I think they did a good job getting all the main points in.”

The cross-curricular approach allowed several classes to take part in the play in different ways.  A student in Uhacz’ class pointed out that studying the book gave him a different perspective on the play when he saw it.  “I was impressed.  I’ve been impressed with all the plays in the past, but I think they did a really good job with this.  I understood it the best before going in, and some of the previous ones, I didn’t know much about.”

It’s not too late to see this amazing production of Dracula.  The show will continue on November 1 and 2 at 7 p.m. at the Performing Arts Center at Ridgefield High School.  Admission is $5 for students, staff and seniors and $8 for adults.  A limited number of VIP seats are available for $20 each and can be purchased at the door (you’ll be right in the middle of the action).

Tickets can be purchased by selecting Events at ridge.revtrak.net or at the door.