This search form uses an instant search feature. As you type, search results will appear automatically below the search field. When you've entered you desired search terms use tab to navigate through the available results and hit enter to open the selected page or document.
Crochet Club Creates Community Connections
Marie Bouvier
Tuesday, November 05, 2019

The library is usually pretty quiet at South Ridge Elementary.  But the afterschool Crochet Club is lively.  Third graders Liberty Glessing and Marta Krawczyk are excitedly pulling out their projects.  Liberty is just learning to crochet and is working on a scarf.  Marta is in her second year of Crochet Club and just completed a bright orange headband.  “I joined Crochet Club because Marta wouldn’t stop talking about it!” Liberty joked.

But Liberty is joining Crochet Club for another reason too.  She is preparing to have surgery for a leg length discrepancy; the recovery will have her in a wheelchair for several months.  “I wanted to do something while I was in a wheelchair, so I wanted to learn,” she explained.  Her story gave the club the idea to do something positive for other kids in the hospital:  their next project will be crocheting hats for children at Doernbecher Children’s Hospital.

Liberty Glessing and Marta Krawczyk have a great time at Crochet Club. 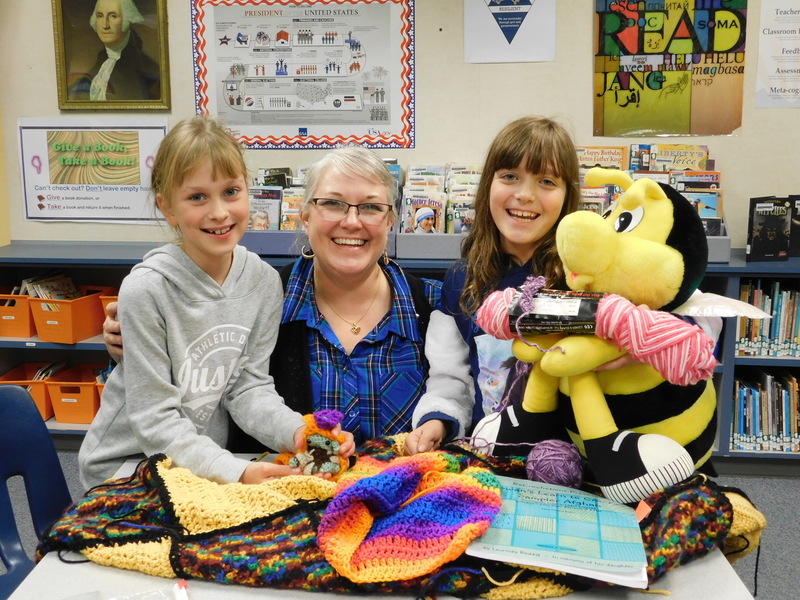 Krawczyk, Crawford and Glessing pose with some of their projects.

This brings the Crochet Club full circle for librarian Emily Crawford.  Her own daughter had cancer and received hats at the hospital when she was going through chemotherapy.  “When my daughter lost her hair, so many people donated hats; I knew it was something I wanted to do,” she said.  Her daughter has since recovered, and it seemed a perfect way to give back.

Interestingly, Crawford started her first Crochet Club when she was a librarian at Liberty Middle School in Camas—and she didn’t know how to crochet.  A parent, Laurinda Reddig, was a crochet designer and author of several books.  One of the books was Rowan’s Learn to Crochet Sample Afghan, with patterns for baby blankets and a newborn hat.  Reddig wrote the book in memory of her first daughter, Rowan.  With Reddig’s help, Crawford learned to crochet at the same time as her students.  Now Crawford’s new club will be able to give back with their own crocheting, using the hat pattern from Reddig’s book.

The Crochet Club will be using yarn donated by Paula Labenske, the grandmother of one of the students in Crochet Club last year, for the hats they are donating.  Much like the stitches that cross and weave together, the Crochet Club is creating a lot of community connections with its giving spirit.