This search form uses an instant search feature. As you type, search results will appear automatically below the search field. When you've entered you desired search terms use tab to navigate through the available results and hit enter to open the selected page or document.
Dear Veterans ...
Marie Bouvier
Thursday, November 14, 2019

A long line of students and teachers trooped down the sidewalk on Pioneer Street.  On this beautiful, sunny day, they weren’t headed to the fire station or the park.  Instead, the entire fourth grade class from Union Ridge Elementary was going to the special mailbox in front of Bob’s Automotive, bringing handmade cards and letters for service members.

The mailbox is a project by the American Veterans Car Club and club member Bob Ford, owner of Bob’s Automotive.  Ford served in the Coast Guard and Navy for 16 years, so he and other members of the club remember well how much it meant to receive mail while they were deployed; they wanted to find a way to collect letters from the public to send to the military.

When Ford’s daughter found the 1964 U.S. mailbox in Oregon, it seemed like the project was meant to be.  The car club had the mailbox specially painted.  While it used to be used for all kinds of mail, now the mailbox is only for letters to active duty military and veterans.  No stamp is required; club members read and forward the letters. 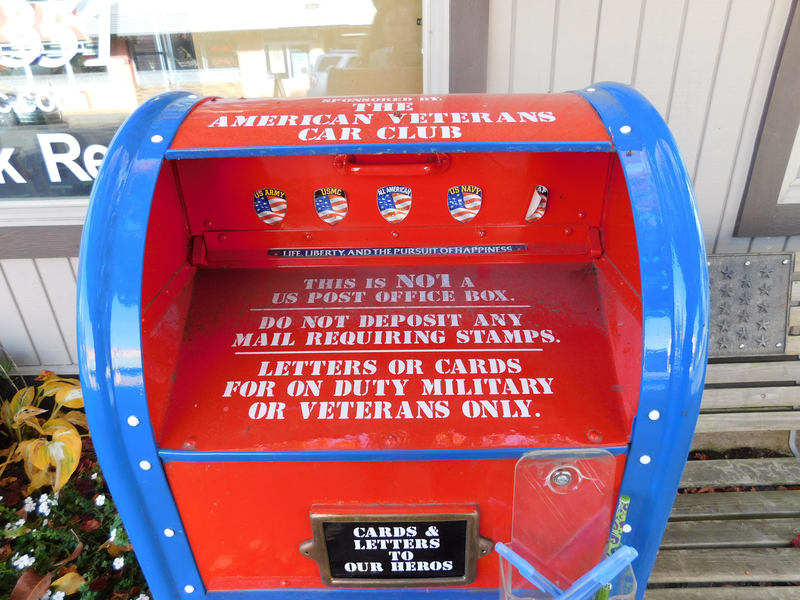 The special mailbox in front of Bob's Automotive is for letters to members of the military. 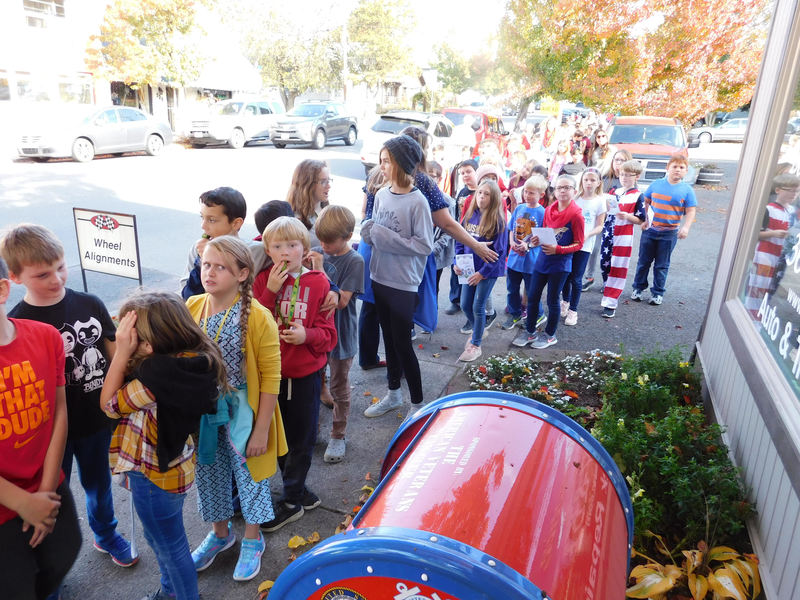 A long line of fourth graders wait to deposit their cards and letters.

The students were excited about the project, and not just because they could leave school to walk downtown.  They had spent a lot of time drawing, coloring, and writing on their cards.  Many of them were wearing patriotic colors or red white and blue face paint.  “I like knowing that one of the soldiers will get it and read it,” one said.  “They’re heroes.”

Ford was happy to see how many students were streaming past.  “I wish I could take photos of every one of them!”  He snapped pictures as the students took turns dropping their letters in the mailbox.  “I was surprised when Mr. Fransen came down here and asked if the students could write letters to the military for Veterans Day.  I said, ‘Of course!’”

Class after class lined up to drop cards in the mailbox.  Students waiting in line waved their letters at passing cars, who honked in support.  A police car blipped its siren, and the kids cheered.  Ford thanked as many students as he could.  “Thank you so much!  It will mean a lot to them, I guarantee it!”

“Dear Veterans,” one card read.  “You are the reason we have freedom.  You are special in all ways.  Thank you for your hard work.”  Another read, “Dear Veterans, I was pumped with excitement to thank you for your service!”  Soon, the heartfelt letters and cards from Ridgefield students will be making their way to military members and veterans all over the world.

The mailbox is available to the public year-round.  Please bring cards and letters for members of the military to the mailbox in front of Bob’s Automotive at 327 Pioneer Street, Ridgefield, WA.