This search form uses an instant search feature. As you type, search results will appear automatically below the search field. When you've entered you desired search terms use tab to navigate through the available results and hit enter to open the selected page or document.
Ridgefield High School Students Dive Into "Shark Tank"
Marie Bouvier
Friday, January 31, 2020

Elijah Engstrom caught everyone’s attention when he rolled a tire into the classroom.  He and his project partner, Leilani Starns, were ready to introduce a (fictitious) new product to market—and they needed help.  Enter the “sharks”.

Shark Tank is the chance of a lifetime for entrepreneurs, who pitch their innovative products to big money “shark” investors.  Students in Andrea Reinertson’s marketing class got a taste of the show’s excitement when they pitched their own product concepts to a panel of “sharks”.

Reinertson asked a number of area businesspeople to participate on the panel.   VaNessa Duplessie from Gartner, Inc., Ashley Jhaveri from Zeppelin, Laura Jhaveri from Killa Bites, Ann Walls from Primerica Advisors, and Michael Bomar from the Port of Vancouver used their business expertise to pose as investors.

The students worked in teams to create product ideas and designs.  They researched potential competitive products and set realistic prices and profits.  Then they built a complete profile of their fictitious company, including money invested, sales statistics, and projected revenue. 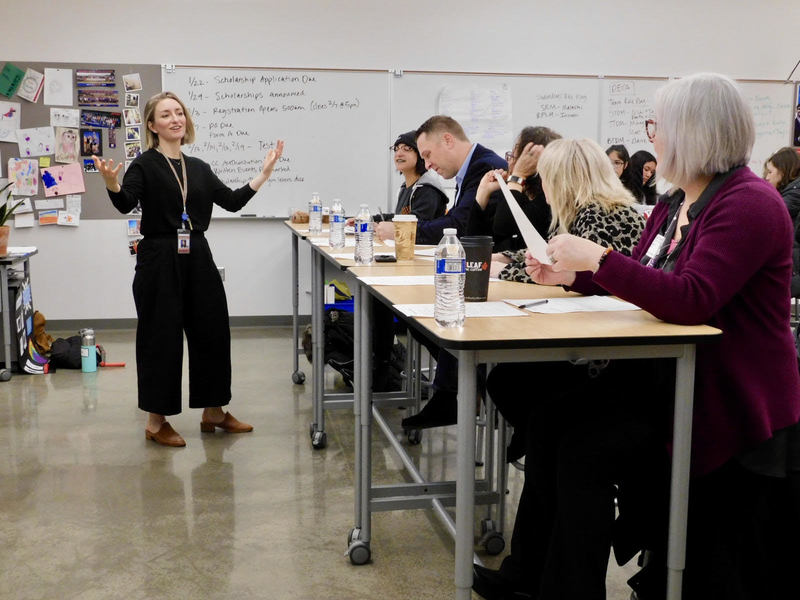 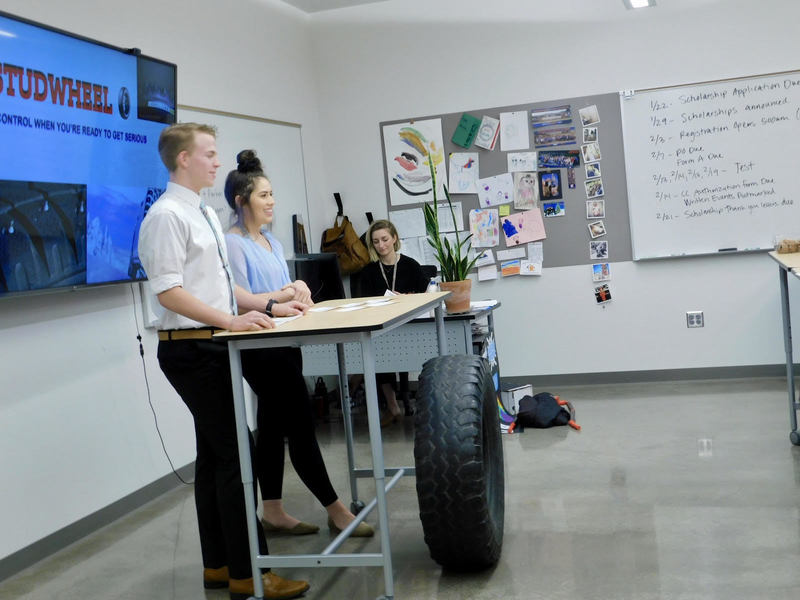 Elijah Engstrom and Leilani Starns tell the panel of "sharks" about their concept for tires with retractable studs.

The teams ended up with a wide range of creative ideas.  One group of students created a solar-powered water bottle with a screen to track water intake and exercise.  Another developed the PortaWave, a portable microwave for campers who were restricted from using fire to cook.

Starns and Engstrom designed tires with studs that extended and retracted with the push of a button, making them easier to use than chains and standard studded tires.  In addition to their eye-catching entry with the rolling tire, they came prepared with sales and revenue projections, an exclusive three-year deal with Les Schwab, and plans to take their brand nationwide.  The sharks decided it was worth a $500,000.00 investment for 20% of their imaginary company.

Luke Price and Alex Fulton designed a toothpaste that turned any remaining plaque purple after two minutes of brushing teeth:  Purple Plaque Attack.  With proprietary ingredients and a great grape flavor, they were ready to take the toothpaste market by storm.  The sharks liked the concept, and the students won an investment of $400,000.00 for 51% of their fictitious company for the first two years, dropping back to 40% with a ten-cent royalty on every unit sold starting in the third year.  “They get control back of their company after they get mentoring, guidance, and we know they’re set up to succeed,” Duplessie explained.   Fulton and Price readily agreed. 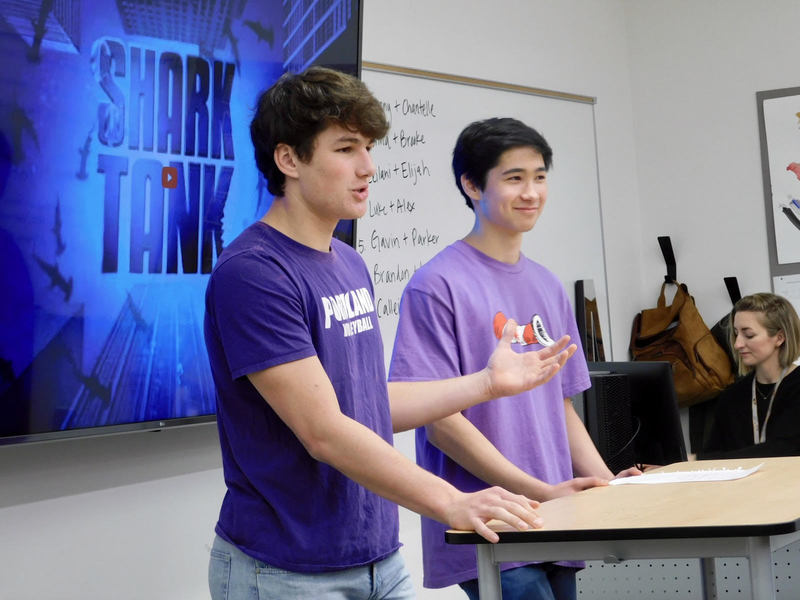 The exercise of creating a product and bringing it to market gave students an idea of the work that goes into startups.  With professional advice from the panel of sharks, they were able to see what the next steps might be for a young business.  With this Shark Tank experience, they’ll be ready to swim with the sharks when they start their own businesses in real life.