This search form uses an instant search feature. As you type, search results will appear automatically below the search field. When you've entered you desired search terms use tab to navigate through the available results and hit enter to open the selected page or document.
Public Artwork Dedicated at South Ridge Elementary School
rsd
Monday, November 06, 2017

South Ridge Elementary School students and staff celebrated the dedication of public artwork in a presentation on November 2, organized by the school.

A committee made up of Ridgefield community members, teachers and school district administrators selected Nakamura from a roster of artists maintained by the Washington State Arts Commission.

The arts commission provided the funding for the art project from the “percent-for-art” funds from the state’s Art in Public Places program (AIPP).  When recent new school construction at the district’s two elementary schools (South Ridge Elementary and Union Ridge Elementary) was completed, both schools qualified to receive the state funds to have public artwork installed at each school site.

Alan Adams, art teacher at Union Ridge Elementary, is credited with applying for the public artwork funding at both schools. 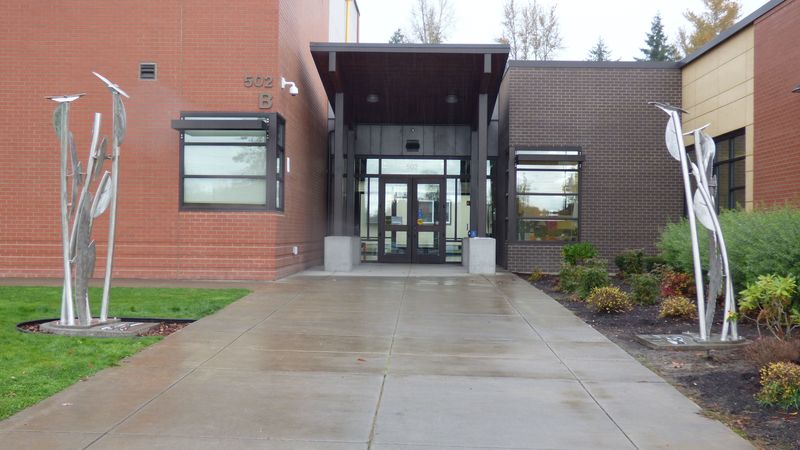 “Confluences” is a pair of stainless steel sculptures depicting bird species relevant to the Ridgefield area, inspired by the Ridgefield National Wildlife Refuge according to Nakamura’s Artist Statement.  “The reeds represent the wetland flora found in the Refuge, and the birds (red-tailed hawk, killdeer, red-winged blackbird, and Norther flicker) are species found at the refuge and at the school.”

The Artist Statement continues:  “The title, “Confluences” comes from the notion that like the Columbia River and the dozen or more streams and rivers and all their flora and fauna that conjoin with the great river along its journey to the Pacific Ocean, the various communities served by South Ridge Elementary School merge together at this facility and become as one.”

Students supplied the words that are etched into the granite at the base of each sculpture.  The sculptures are placed directly across each other on both sides of the main entrance to South Ridge Elementary’s newest building in an east/west orientation, in contrast with the north/south direction of the entry way. 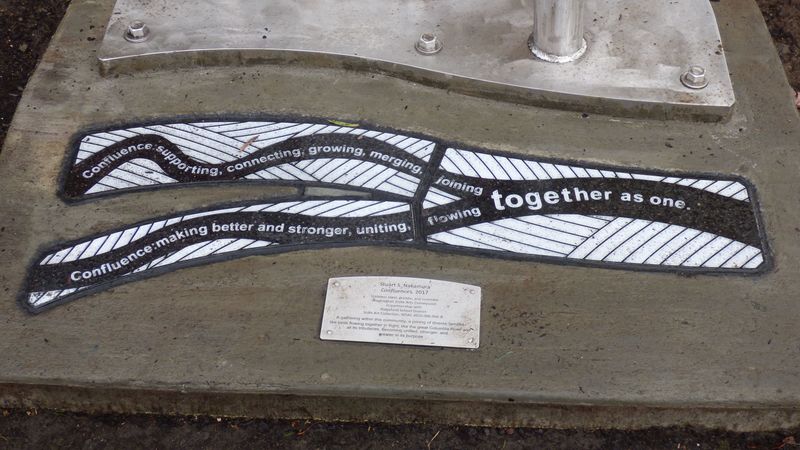 “The design has a pronounced visual lean,” according to the Artist Statement, “so when placed opposite each other, one leads to the classroom and the other leads towards the open fields to the south--signifying the confluences of approaching and departing students and staff during the school day.”