This search form uses an instant search feature. As you type, search results will appear automatically below the search field. When you've entered you desired search terms use tab to navigate through the available results and hit enter to open the selected page or document.
Ridgefield Student Awarded First Place in Essay Competition
rsd
Thursday, March 11, 2021

Ridgefield student Elizabeth Swift was awarded first place in Southwest Washington for the George S. & Stella M. Knight Essay Award.  The annual essay contest is sponsored nationally by The Sons of The American Revolution (SAR), an organization whose members trace their ancestry back to great-grandfathers who fought in and provided support to the American Revolution.

Each year, SAR chapters nationwide invite all students in Grades 9-12 in public, private and homeschooled settings, to submit an essay about an individual or event related to The American Revolution, U.S. Constitution or the Bill of Rights.  Swift, a freshman, is a homeschool student.  She is the daughter of Darren and Evangeline Swift of Ridgefield. 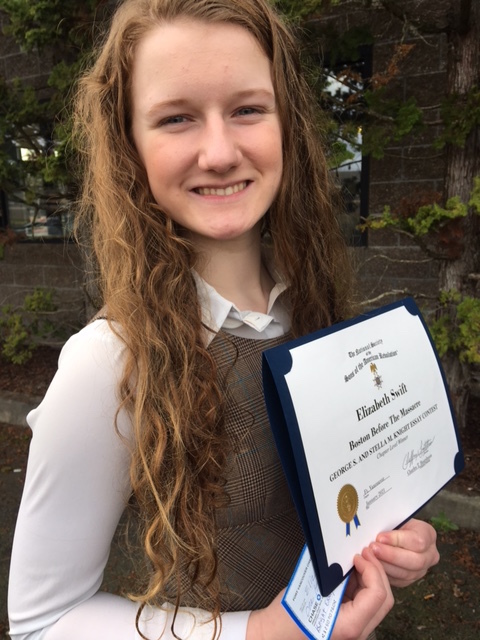 Swift’s essay, Boston Before the Massacre 1765-1770, discusses various events leading up to the infamous Boston Massacre, which was one of the triggers that helped ignite the revolution.  Her essay competed with those of other students, some of whom were seniors.

“Elizabeth’s winning essay didn’t simply look at the Boston Massacre itself,” said Jeff Lightburn, President of the Fort Vancouver SAR Chapter.  “As Elizabeth emphasized in her essay, Boston was a powder keg waiting to explode.  It put into focus the mindset of Colonists at the time and the perilous conditions they were faced with.  We’re very proud of the work she put into her essay.”

The top award was presented to Swift by the Fort Vancouver SAR Chapter at their February meeting, earning her special recognition and a $100 cash prize.  Her essay, which has advanced to the state level, will compete for additional scholarship awards and possible advancement to the national competition where scholarships can amount to $5,000.

We congratulate Elizabeth on her outstanding achievement and wish her the best in the upcoming competitions.