This search form uses an instant search feature. As you type, search results will appear automatically below the search field. When you've entered you desired search terms use tab to navigate through the available results and hit enter to open the selected page or document.
Second Grade Earthquake Engineers at South Ridge Elementary
Marie Bouvier
Monday, March 22, 2021

Usually marshmallows, toothpicks, and Jell-O only get together on the dinner table.  But at South Ridge Elementary School, marshmallows and toothpicks turned into tall buildings on the shaky, earthquake-prone ground of a pan of Jell-O.  Kelle Petree’s second grade students became earthquake engineers for the day, trying to build structures that could withstand a simulated earthquake—and they turned out to be pretty good engineers. 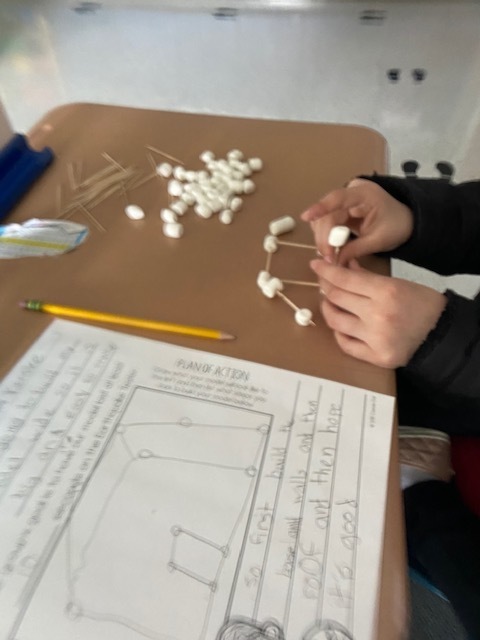 Kenslee Bushnell refers back to a drawing and building plan as she puts her structure together.  PHOTO CREDIT:  Kelle Petree

The second graders read a book called The Earth Dragon Awakes about the 1906 San Francisco earthquake and fire.  When they finished the book, they wanted to know more about why the earthquake was so devastating.  So Petree surprised them with the chance to build and test their own structures.

The students started the STEM project by doing research, looking at pictures, and watching videos.  They studied how engineers at the University of California San Diego are designing and building innovative new earthquake-safe structures, creating much taller, safer buildings than the ones that fell in the 1906 earthquake.

After they finished their research, the students built a wide structure with at least four walls out of mini marshmallows and toothpicks.  When the structure was complete, they tested it on the “earthquake ground”—a pan of strawberry Jell-O.  They put their structure on the pan, then shook the pan until the structure either broke apart or jumped out of the pan.  The students recorded what worked and what didn’t, as well as how long it took for each structure to fail.

The next step was to build a tower.  “That part was extra challenging, navigating sticky marshmallows and toothpicks, but they made it work!” Petree laughed.  “We followed the same experiment, but this time found that our towers didn’t last very long at all.”  The taller structures were less stable, and the Jell-O softened and wiggled apart, similar to earthquake aftershocks. 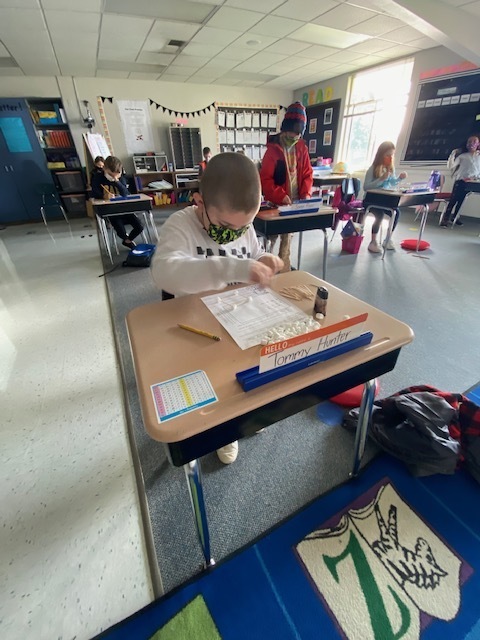 Tommy Hunter carefully assembles the base for his marshmallow and toothpick structure.  PHOTO CREDIT:  Kelle Petree

At the end, the second graders determined what worked best (lots of marshmallows lining the bottom of the toothpicks) and what didn’t work as well (having fewer walls).  Brayden Mattox was the top engineer of the day, with an impressive 33 seconds for his structure and 39 seconds for his tower.  Petree said the class was impressed with Brayden’s record.  “We were all amazed at his creativity in keeping his buildings earthquake safe!”

For these second graders, getting back to hands-on projects in the classroom has been a lot of fun.  Maybe someday, the marshmallow and toothpick earthquake project will inspire them toward careers in science, building, or engineering, keeping all of us safer when earthquakes hit.