This search form uses an instant search feature. As you type, search results will appear automatically below the search field. When you've entered you desired search terms use tab to navigate through the available results and hit enter to open the selected page or document.
Ridgefield High School Team Qualifies for National Knowledge Bowl
Marie Bouvier
Wednesday, March 31, 2021

Which school’s Knowledge Bowl team just won its first-ever invitation to compete at the national level?  If you answered Ridgefield High School, you would be correct.  In an impressive win, the small-town school achieved the highest score in the entire state for the 2A division, earning the right to compete at nationals.

State level competition rules changed due to COVID, allowing the Ridgefield team to continue on to challenge schools in the 2A, 3A, and 4A divisions—and they still made it to the top three statewide.  Ridgefield High School placed third across all divisions behind two much larger 4A schools.  “Third place at state in a normal year is pretty good,” coach David Jacobson said, “but to do it against schools that have almost 3,000 kids is amazing.”

Captain of the winning team, senior Jonah Kropp, and team members senior Caroline Ceravolo, junior Micah Ross, and freshman Adam Ford, also had to shift their strategy for other changes to the state level contest.  In addition to the new multi-division level of competition, COVID also mandated a change from in-person to online competitions.  Instead of the Jeopardy-style, fastest-to-the-buzzer format, the students heard questions on Zoom, then discussed team answers on Discord.  “The state competition was strange, but fun, as the online experience is significantly different than standard state,” Kropp said.  “It was a blast though.”

Another significant change this year was the shortened season due to COVID, with less time and fewer meets to prepare for the state level contest.  The team practiced online for months, preparing for challenging questions in math, science, history, English, social studies, and current events.  While all of the students have an incredibly wide range of knowledge, they also have strengths in individual subjects:  Kropp in science, Ceravolo in literature, Ross in geography, and Ford in history.  Sophomore Olivia DesRochers specializes in math and will be joining the team for the national competition; she captains the junior varsity team, which also won the championship in their league.  (The other junior varsity team placed second, giving Ridgefield High School the top two places in that league.) 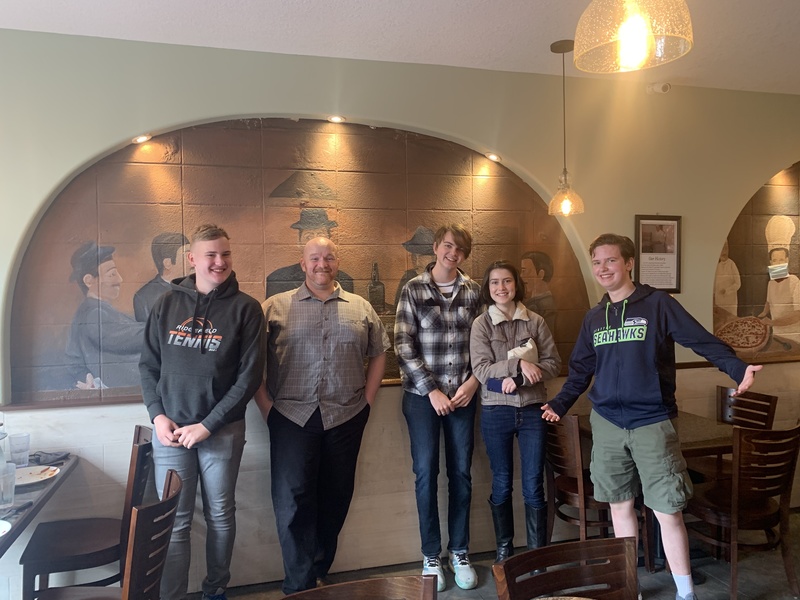 The experience has been a whirlwind for the students.  Ford said, “Our whole team was ecstatic to hear that we had advanced to the national tournament—and a little scared too, since this would be the best of the best in the country we have to face.”  All five team members will continue to work together to hone the fast-paced teamwork required for top level competition.

Kropp agreed that the team has a lot of work ahead of them.  “We are doubling down on our studying to prepare for nationals,” he said.  While the competition for nationals will still be held online, the phased return to in person school means the team can at least practice together in person.  They were even able to celebrate their state win with a dinner at Vinnie’s Pizza.

Jacobson is very proud of the team’s accomplishment and understands how much work went into their win.  He is an experienced competitor himself; his high school team went to national competition two consecutive years, where he earned a spot on the Academic All-America team—and he continues to excel in Knowledge Bowl, winning this year’s Lower Columbia Knowledge Bowl Coach of the Year.  He is eager for this Ridgefield team to enjoy what it feels like to be a top-level competitor.  “National competition will be an experience these kids will never forget, even if it’s all online this year,” he said.

While it may be disappointing that they cannot attend the national competition in person, the team is already looking ahead.  Ford said that after the online competitions this year, “I can’t wait for in person Knowledge Bowl again.”  Coach Jacobson is also looking forward, starting to think early about fundraising for next year’s potential in person trips to state—and maybe even national—competitions with the next generation of teams.  Ridgefield’s strong Knowledge Bowl program has a good chance of continued success.  Former coach, the late Ken Bisbee, established the program years ago; his wife, Nancy, continues to be the team’s biggest fan, assisting with all of their practices and matches.  The years spent developing the Knowledge Bowl program gives Ridgefield students an edge when it comes to competition.

With multiple high school and middle school teams, Ridgefield students gain experience, knowledge, and skill from moving through the ranks; team member Ford is a freshman who has been participating in Knowledge Bowl since seventh grade.  And the middle school team learns from the high school team, who volunteer to run their practices, mentor them on what classes to take in high school, and explain how to plan ahead for success.  The program allows the students to learn from each other and build on each other’s strengths—while having a great time.

The whole team is excited about the state level win, and they are looking forward to competing in the national tournament.  But no matter what happens, they are grateful for the program, the fun, and the camaraderie they have together.  “I really like the team environment that Knowledge Bowl fosters,” Kropp said, “and the friendship in victory or defeat.”

Ford agreed.  “What I like most about Ridgefield Knowledge Bowl is the chemistry between teammates and the friendships we form along the way,” he said.  “Even if we don’t do great, we have a good time trying to be the best.”   Hopefully the national competition will give this winning team another chance to shine.