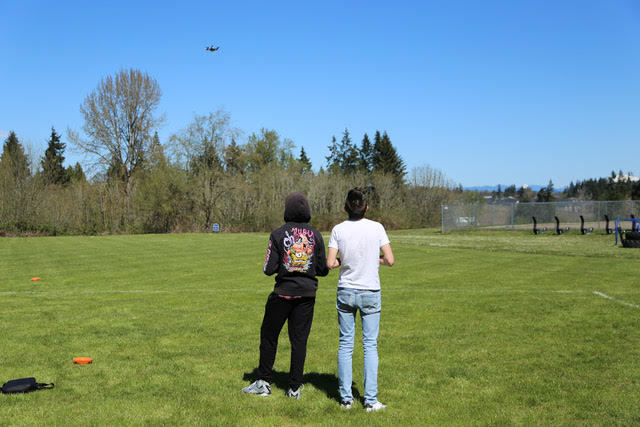 Under a clear blue spring sky, a group of Ridgefield High School students excitedly left their classroom and headed out to the practice athletic fields. Instead of athletic gear, these students were equipped with something entirely different: remote controls and drones they had built in teacher Steve Rinard’s engineering class.

At the beginning of the semester, Rinard’s students were still attending online classes from home, so they started by learning the science behind how drones operate. When they returned to in-person class a few weeks ago, teams of students were able to work together, using parts from kits to assemble the drones. 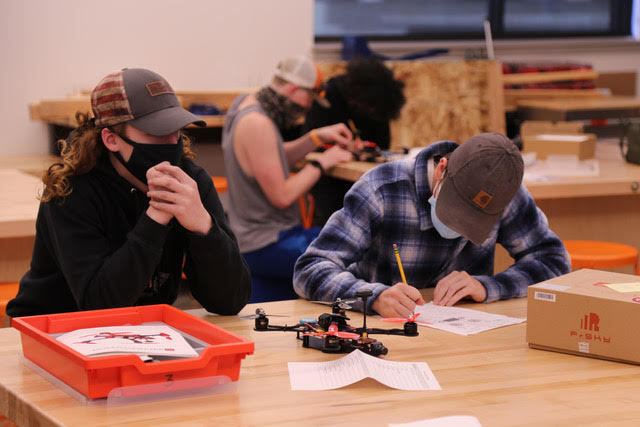 Tucker Alexander (left) and Caden Anderson worked as a team to build a drone in Steve Rinard's engineering class. 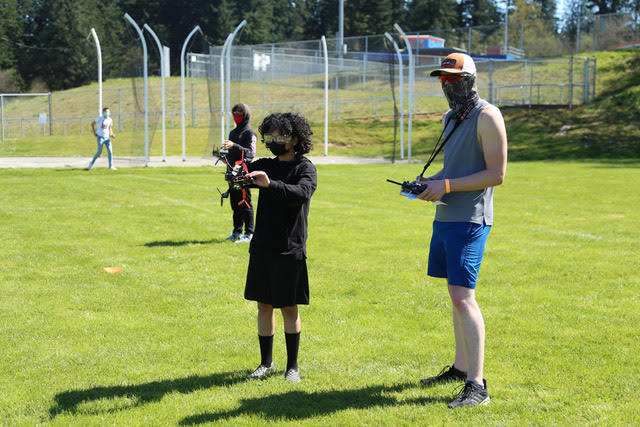 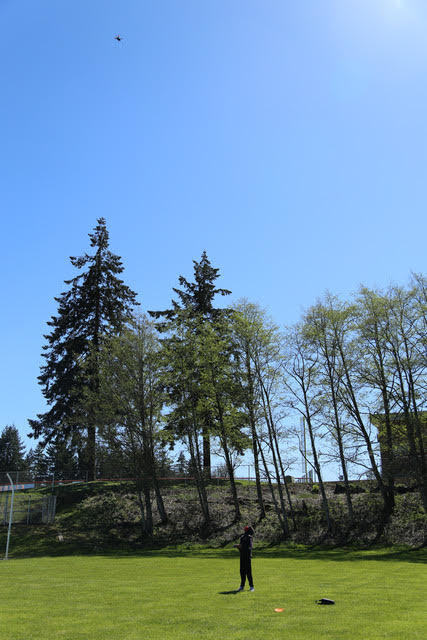 Senior Matthew Vance said he greatly enjoyed the process. “The actual physical assembly wasn’t that difficult, but the calibration and technical aspects were a bit more tricky,” Vance said.

After weeks of planning, building, and testing, launch day finally arrived, and Rinard and his students couldn’t wait to see how the drones performed. Launch day featured perfect flying conditions with bright sunshine and a light breeze. There were high expectations as the teams readied their drones for flight. Some drones took off quickly into the air, but others needed a little help to get moving. With a few adjustments, more drones lifted skyward, first in fits and starts, then in smoother, gliding flights as the students got more comfortable with the controls.

Vance and his team enjoyed a successful drone launch. On the whole, Vance thought the class did well. “There have been crashes, and broken pieces,” he said, “but flying the drones was a lot of fun!”

“We quickly learned that flying drones is not easy,” Rinard said. “It takes a little patience and a lot of practice to get the hang of it. And of course, it’s definitely helpful to have tools and extra parts on hand.”

Rinard’s inspiration for the new class came after he attended a pair of conferences that featured several offerings on drones. “Once I saw them in action, I felt that it was something we could offer that would really add to our students' learning,” Rinard said. Not at all deterred by the fact that he had never built or owned a drone himself prior to creating the class, Rinard joked that he “has this curse of always wanting to learn and know more!”

Rinard developed every aspect of the class around building, programming, and flying the drones with the intent of energizing Ridgefield High School’s engineering program. He looks forward to teaching the class again next year so more Ridgefield students can apply their engineering knowledge to hands-on projects.