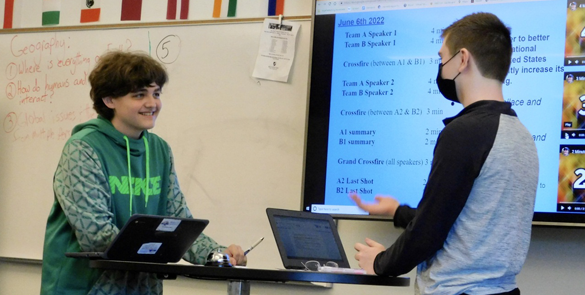 Nolan Carney and Nolan Fisher face off in speech and debate class. The air is charged as they counter each other’s arguments, skillfully weaving in research to support their statements. The topic, whether the U.S. should significantly increase military spending to better respond to international conflicts, is a policy question that might not ordinarily be a class favorite. But the rest of the class pays close attention to the spirited debate. In the next rounds, teammates Keegan Wallace and Bennett Anderson will continue to build on the topic, adding fuel to the fire.

Speech and debate is a new elective this year at View Ridge Middle School. History teachers David Jacobson and Leilani Lamoreaux are putting their students’ research, writing, and presentation skills to the test with the popular class. They developed the program with help from teacher on special assignment Paul Hamann, who built a successful speech and debate program at Heritage High School in Vancouver.

“Speech and debate involves so many important academic skills that can easily be leveraged by other disciplines,” Jacobson explained.

Each debate is carefully structured, with two students on each team. Team members from each group take turns speaking on the topic, then debating each other in crossfire. After a summary from each team, there is a grand crossfire with all four speakers before a final supporting argument called last shots. During the debate, students use their time to build several arguments and respond to points made by the other team.

Team A argued to increase the military budget to provide protection for U.S. citizens and for allies, improve existing armaments, and prepare against future threats. Team B argued not to increase the budget because the U.S. already has superior military power, is trillions of dollars in debt, and could better spend taxpayer dollars on other programs, like education and research. The rapid fire back and forth discussion clearly demonstrated the time that the students put into researching and understanding the issues on both sides.

At the end, all four students shook hands, then turned their backs to the class so the class could vote. Team A, arguing for increased military spending, was the winner. But both teams got feedback from the rest of the class, noting arguments that had been dropped, points that might have been emphasized, and effective counter-arguments that could help each team’s case. It was more analysis than critique, offering ways that all of them could be more effective in the next debate.

The class is very different from the rest of the school day, and the students enjoy it. One student said, “It has made me more aware of other people’s perspectives on things. Even if I don’t agree with them, it has made it easier for me to understand where they are coming from.” Another added, “I think in the future it will make me a better public speaker and it will help me more in life.”

The course has proved so popular that another class will be added next year. For View Ridge Middle School, a class that increases students’ confidence, improves public speaking skills, and builds teamwork has made a winning argument for success.