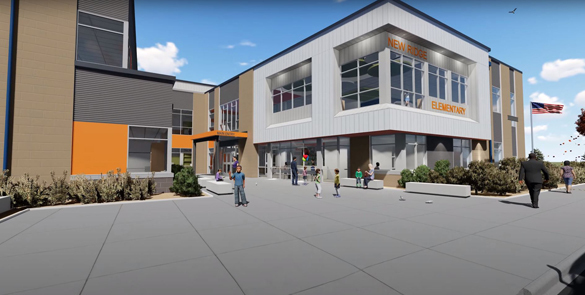 Ridgefield School District’s Board of Directors voted unanimously on Tuesday to put a bond before voters that, if passed, would fund the construction of a new elementary school, help alleviate overcrowding, and provide additional classroom space at Ridgefield High School. The bond will be listed as Proposition 7 on the February 8, 2022 special election ballot and requires approval by a 60 percent supermajority to pass.

If approved, the $66.785 million bond would fund the construction of a new 75,000 square foot K-4 elementary school that would open as a K-6 school to help alleviate overcrowding at the district’s existing elementary and intermediate schools. The bond would also fund an 18,000 square foot expansion at Ridgefield High School, featuring a new metal shop and classroom, eight general education classrooms, and space designated for future Career and Technical Education (CTE) classrooms.

According to the United States Census, Ridgefield’s city population more than doubled from 2010 to 2020, growing from 4,763 residents to 10,319. That is a 116.6 percent increase, and has led to record enrollments for the school district. Beyond the city limits, the total district population is now at 21,369 residents, making Ridgefield one of the fastest-growing cities in the region. In fact, Ridgefield has been tabbed as Washington’s fastest-growing city three times in recent years.

“People move to Ridgefield because of our great schools,” said Ridgefield School Board President Joe Vance. “If our schools are going to remain one of Ridgefield’s greatest assets, then the community needs to come together to support this bond. Ridgefield has been rapidly growing and will continue to do so, and providing more classroom space is necessary for us to serve the current and future needs of Ridgefield’s students and families.”

Ridgefield residents are currently paying $3.19 per $1,000 of assessed home values in school taxes, which is the second-lowest school tax rate in all of Clark County. If voters approve the bond, collections would begin in 2023 with a projected rate of $3.51 per $1,000 in assessed home values, representing a projected rate increase of $0.32. With a median home value in Ridgefield of $562,000, the projected cost per year of funding these projects would be $179.84 per household per year, or $14.99 per month.

The new elementary school would be located at 7025 North 10th Street in Ridgefield and built on land the district already owns. Designs for the new school include an 8-plex classroom building that would provide much-needed additional instructional space. The site is permitted and ready to begin construction, and if approved by voters, the new elementary school would be on track to open in the Fall of 2023.