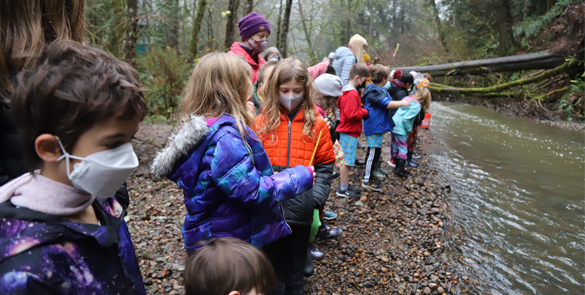 On a cold and foggy December morning just before the start of Winter Break, a group of about 30 second graders from Corrina Hollister and Ellen Ferrin’s classes at Union Ridge Elementary School clambered along the rocky banks of Gee Creek in Ridgefield’s Abrams Park. Jockeying for position to get a better view, the students watched excitedly as Hollister released a group of salmon fingerlings into the flowing waters, oohing and ahhing as they watched the tiny fish embark on their journeys toward adulthood. 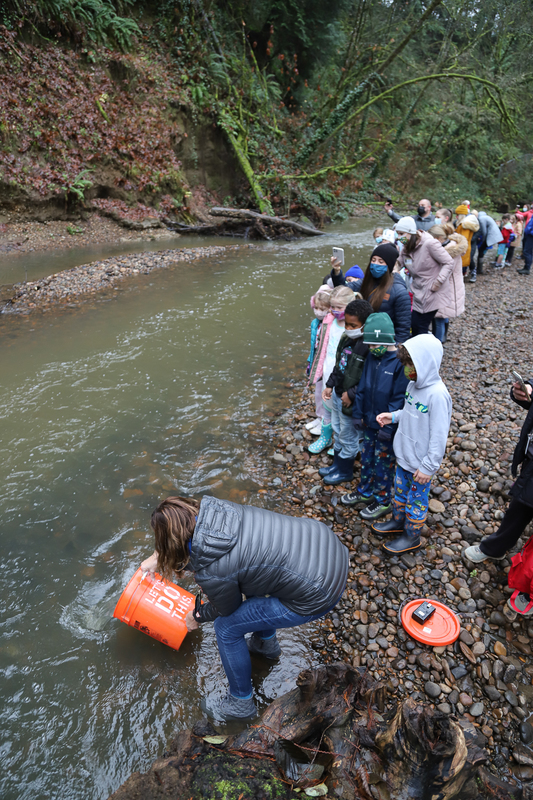 The Ridgefield School District second graders had cared for these fingerlings for the previous several weeks, priming the tank for the arrival of 250 new salmon eggs that will arrive in January. Students will watch as those eggs hatch into tiny baby salmon (called alevin), grow into baby fry, then become fingerlings that are big enough to be released on a later trip to Gee Creek. Administered by Columbia Springs and funded by Clark Public Utilities, the “Salmon in the Classroom” program provides fish tanks to schools across Clark County for an entire semester of hands-on environmental education.

Kim Stenbak’s fourth grade class at Union Ridge also has a fish tank through the Salmon in the Classroom program. Her students visited Gee Creek to test the water quality before the fingerling release. They took water samples from four spots throughout the park, then returned to class to test the samples. The students compared data to determine the optimal spot for release, giving the salmon fingerlings a greater chance of survival.

Usually only one fish tank is approved per school, but Stenbak applied last year when COVID kept the students from the classroom. Now, Union Ridge has the rare opportunity to have a salmon tank in each of its two buildings. The tanks are intentionally placed in the hallway so all of Union Ridge’s students have the chance to see the salmon as they grow. 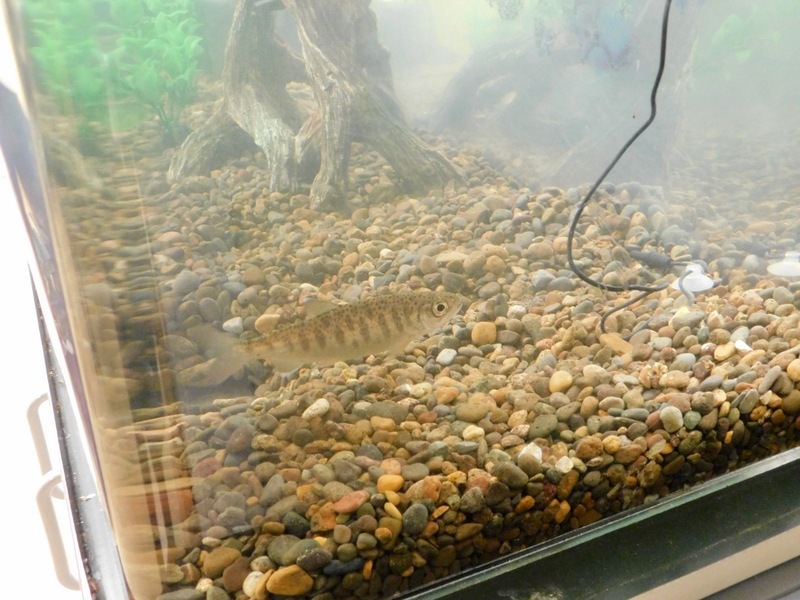 Hollister, Ferrin, and Stenbak are taking the lessons beyond science class, using salmon as a theme across multiple subjects. Fourth grade students drew detailed salmon pictures that line the stairwell to the second-floor fish tank, emblematic of the salmon’s annual swim upstream to spawn.

Second grade students learned about salmon’s honored place in Native American culture in their tribal sovereignty unit, reading books like “Shanyaak’utlaax: Salmon Boy”, a Tinglit story about a child who learns respect for nature, animals, and culture from the Salmon People. The multi-subject approach gives students a strong sense of salmon’s importance to the Pacific Northwest’s history, ecosystem, and culture.

The project also helps students realize how precarious salmon’s lives can be. Salmon typically lay 5,000 eggs, but only two or three survive to adulthood. They face many dangers as they grow, including dam turbines, fishing boats, and animals like bears and eagles. Now, climate change poses yet another threat to young salmon. Last summer’s heat wave made water temperatures unlivable for salmon in the Columbia River, leading to open lesions and white fungus on the fish. Students are seeing firsthand how directly climate change affects the salmon, and how even a small environmental change can have lasting consequences.

The Union Ridge teachers are pleased to not only see their students get excited about the salmon release—but also absorbing the larger message of how salmon impact our lives, our environment, and our ecosystem. “It makes the message of climate change real,” Hollister said. “We need to let these kids know it’s our job to care for the environment, all of us.” By teaching about salmon’s importance to the Pacific Northwest, these students are taking the first steps toward becoming lifetime stewards of the environment, actively protecting the salmon and other natural resources.