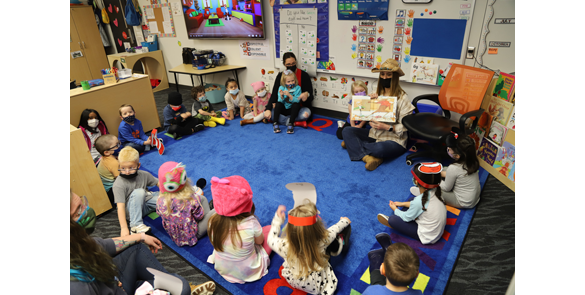 From PTO President to Mayor: Ridgefield’s Jennifer Lindsay is a longtime advocate for schools

When Ridgefield Mayor Jennifer Lindsay says she supports Ridgefield schools, she means it. As the parent of two students in the district, she has spent hundreds of hours planning fundraisers, managing teacher grants, and visiting classrooms. Now as Ridgefield’s mayor, her support for the schools is undiminished; she believes education is one of the city’s highest priorities.

Like many Ridgefield residents, Lindsay is a transplant, moving here from Bonney Lake, Washington twelve years ago. Her family immediately fell in love with Ridgefield’s small-town feel, and they put down strong roots. With both her son and daughter attending Ridgefield schools, Lindsay joined the Union Ridge Elementary Parent Teacher Organization (PTO) and served as president for two years.

During her tenure, Lindsay directed several large-scale events and fundraisers for the school. Those fundraisers were extremely successful, funding teacher grants that were larger than previous years.

“We got a grant request from a teacher who wanted a couple of microscopes for her class,” Lindsay remembered, “and I said, ‘Why don’t we just get a whole cart of them so each student can have one?’ And she teared up, she was so happy. That interaction got stuck in my brain; it made me think of how many other ways I could help the schools.”

The interaction had a greater impact as well. “It got me hooked on wanting to do public service,” Lindsay said, “on being able to see the direct impact of what you do.” She decided to volunteer on the city of Ridgefield’s planning commission, where she served two years. Then she served three years on city council before being unanimously elected as mayor by her fellow council members in January 2022.

“Being mayor is really rewarding, although having to absorb so much information the first six to eight weeks made it feel like drinking from a firehose,” Lindsay said with a laugh. “I am proud to be part of such an active and involved city council. Every single councilperson is accessible. We all reach out, and we enjoy going out to talk to people.”

Lindsay believes this communication is even more important as the city continues to grow. “We have a lot of new people who have fresh ideas and new ways to move forward that we haven’t thought of before,” she said. “If you don’t change, you get stagnant. And Ridgefield is definitely not stagnant!”

Lindsay is from a family of educators, so she looks beyond the school system at how education can have an impact on a regional level. “Education is not a one-size-fits-all product,” she said. “It’s important to focus on more than just traditional four-year universities, to include trades and alternative education. There’s a value in getting a two-year degree, in interning or apprenticing. We want to make more of that available to people here in Ridgefield.”

The plan to build Clark College’s Boschma Farm campus in Ridgefield is part of that, but Lindsay is also looking ahead to create economic development around it. “What businesses can use this well-trained workforce, and how do we draw those businesses here?” she asked. By tying education into the local economy, Lindsay sees a path to success for everyone involved. “Education is so important,” she continued. “It’s the one universal thing that everyone can use to better themselves.”

Lindsay reflected on how the city’s growth has created a dire need for new schools. “I understand what parents and kids are going through with all this,” she said. “And it’s a tough choice when schools have to think about going to A.M./P.M shifts or repurposing shared spaces.” She paused. “I hope the people of Ridgefield understand that when there are no more resources, logistically the schools have to make tough choices. I hope it doesn’t become necessary. We don’t always realize the impact of decision-making now, and how those decisions will impact future generations.”

Lindsay says the high quality of Ridgefield schools has always been a draw for new residents. “The top three reasons we hear about why people move here are the small-town feel, the schools, and the accessibility of nature. It’s important to us to preserve and protect all of those things,” she explained. “Schools are not just a resource for the students, but also for the community. Education will always be a high priority for us here in Ridgefield.”

As mayor, Lindsay plans to continue her work as a strong advocate for schools and for the community, preserving Ridgefield’s charm and supporting its positive growth.