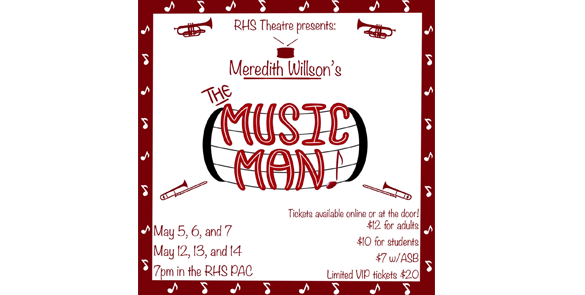 Ridgefield High School Theatre returns to the stage next week, kicking off a run of six performances of Meredith Willson’s beloved musical “The Music Man.” Opening on Thurs., May 5, this marks RHS Theatre’s first live musical theater performance since 2019.

When Harold Hill, a traveling con man, arrives in River City, he convinces the locals to start a band by purchasing the uniforms and instruments from him. His intention is to flee as soon as he receives the money. Librarian Marian Paroo suspects Harold is a fraud but holds her tongue since her moody brother, Winthrop, is excited about the band. As Harold begins to develop feelings for Marian, he faces a difficult decision about skipping town.

Performances of “The Music Man” will be on May 5-7 and 12-14. All performances will start at 7 p.m. in the Performing Arts Center at Ridgefield High School. Advance tickets can be purchased at: https://wa-ridgefield-lite.int... or at the door on the night of the performance. Tickets cost $12 for adults, $10 for students, and $7 with a valid ASB card. Student tickets can be purchased from Hillary Wheeler in the main office at RHS. A limited number of premium seat VIP tickets are also available for $20 each. Eight VIP ticket packages are available for each performance and include seats at a table close to the stage where the actors will interact with you as part of the show.